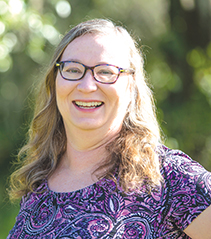 Marjorie Savage’s ordeal began last May with an aching shoulder that flared up during an event at DeLand’s Stetson Baptist Church, where she’s responsible for preparing meals as the food service director. Photo by Nerissa Johnson. “I was miserable during the entire event,” Marjorie recalls. “I sat there and kept moving my arm and holding it.” Sitting didn’t bring her any relief; in fact, it made the pain worse. She sought treatment from a massage therapist, but it didn’t help. At a friend’s recommendation, she made an appointment with Jeremy M. Gordon, DC, at DeLand Chiropractic & Spinal Decompression. An x-ray revealed degenerative disc disease and bone spurs in her neck that Dr. Gordon attributed to a previous injury, which Marjorie figures she suffered in a car accident in 1988. She had a headache but didn’t think she was hurt, so she didn’t seek treatment, a decision Marjorie now regrets. She also remembers falling on her back when she was 12 and suffering from “major headaches” that led her to seek treatment from another chiropractor when she was 18. “Soft tissue injuries to discs, ligaments and nerves can happen at the time of the accident,” Dr. Gordon explains. “Bone spurs can take a number of years to develop and form as the body tries to stabilize the injured area of the spine.” Dr. Gordon initially performed traditional chiropractic adjustments that left Marjorie feeling progressively better – until “one day, it was like I’d gone back to day one.

Spinal decompression is a drug-free, noninvasive, nonsurgical therapy for bulging, herniated or protruding spinal discs; spinal stenosis, degenerative disc disease, neuropathy in the arms or legs, and post-surgical neck and/or back pain. “We initially perform ten treatments to see how patients will respond,” Dr. Gordon reports. “Our goal is usually a fifty percent improvement in function and a fifty percent improvement in pain within that first two weeks. If they have that kind of improvement, then we continue with the rest of the twenty- four-visit rehabilitation protocol.” The DRX9000 machine gently stretches the spine while patients lie on the treatment table. Through gentle motion, the therapy increases disc space and restores nutrients and hydration to allow the discs to heal. “It rocks your head to sleep,” says Marjorie, who napped during her hour-long treatments.

“It felt really good.” Marjorie noticed improvement following the second week when she realized she no longer relied heavily on over-the-counter pain medication. At the height of her ordeal, she was taking pills every two hours, using a heating pad at every opportunity and lying down or standing instead of sitting. “The pain would not allow me to sit for any length of time,” she complains, adding she was fortunate that her job requires her to spend so much time on her feet. By July, Marjorie felt well enough to chaperone a group of high school students on a mission trip to Chattanooga, Tennessee.

Dr. Gordon emphasizes that each case is unique and not all achieve the same results. “Most patients who receive spinal decompression therapy are starting at a pain level of eight, nine or ten on a scale of ten,” he states, “and most bring it down to a one or a two. Many people, like Marjorie, become pain free.” Dr. Gordon points out that the DRX9000 machine can effectively treat both neck problems like Marjorie’s and lower back issues, which are very common. During her spinal decompression therapy, which she initially received daily and then three times a week, Marjorie became friendly with the doctors and staff at DeLand Chiropractic, which she likens to a family. “At my last decompression treatment, the staff said, We’re going to miss you. I said, Well, I’m coming back for adjustments now. You’ll see me once a month instead of every week. “No matter what type of treatment I receive at DeLand Chiropractic, I know that I’m going to be well taken care of,” Marjorie concludes.