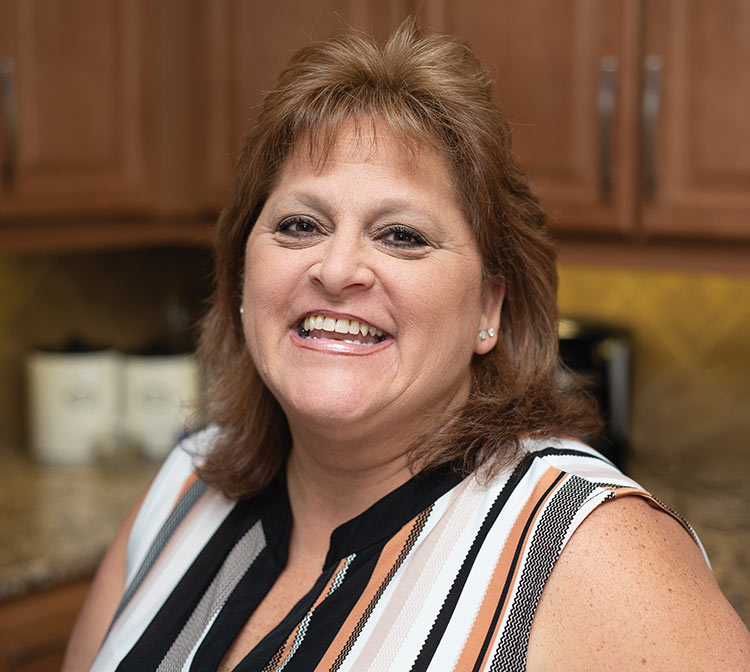 Angela Venezia is a survivor. There’s no other way to describe someone who, at the age of 18, walked away from two head-on car collisions and later walked away from yet another car accident in which her vehicle was hit and spun around during a rainstorm.

In Angela’s case, however, survival came at a cost. For years following the second of those three collisions, she was constantly hampered by what she says was mostly nagging lower back pain and sciatica.

“The pain was really more of an annoyance than anything else,” Angela explains. “In particular, it was uncomfortable for me to sit for long periods of time, but other than that, it really never kept me from doing anything I wanted to do.”

The fact that Angela played catcher on a variety of softball teams, including an adult fast-pitch team, well into her 30s is proof of that. Over time, though, all those collisions and years behind the plate took their toll. So did her job.

Angela has spent the past 35 years working in the mortgage banking industry, most of it behind a desk, where she served one of the nation’s top mortgage companies as a servicing oversight liaison. All that sitting, she says, didn’t do her back any good.

“I’m sure that didn’t help, because it was about a year ago that my back problems started to get a lot worse,” she says. “In addition to the lower back pain, I started to experience numbness down my right leg – all the way down past the calf and into my foot.”

“Before you have surgery, go to DeLand Chiropractic and Spinal Decompression and have them look at you.” – Angela

The increased pain and discomfort soon prompted Angela to visit a local orthopedic clinic, where she was advised to get an MRI. The MRI revealed some disc damage that the physicians at the orthopedic clinic said would best be repaired surgically.

Despite the pain she was experiencing, Angela was in no hurry to have surgery performed on her back. She decided instead to see if her problem was anything that could be improved through traditional chiropractic care.

“I showed the chiropractor my MRI, and she did a couple of adjustments on my back, but it didn’t work,” Angela remembers. “That’s when she told me that she thought I was probably a perfect candidate for spinal decompression.”

Spinal decompression is a drug-free, noninvasive, nonsurgical therapy that can be used to treat bulging, herniated or protruding spinal discs; spinal stenosis, degenerative disc disease, neuropathy in the arms or legs, and post-surgical neck and/or back pain. 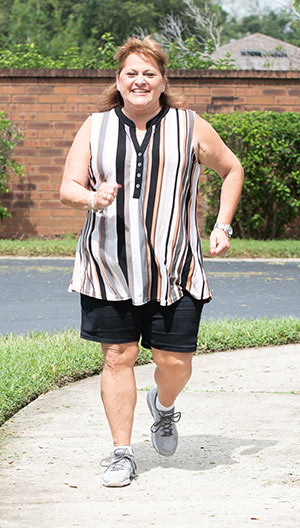 Angela is back on her feet, exercising pain free

Angela’s chiropractor didn’t have the specialized equipment necessary to provide spinal decompression treatments, so she advised her to visit DeLand Chiropractic & Spinal Decompression, which is run by clinical director Jeremy Gordon, DC.

At DeLand Chiropractic & Spinal Decompression, decompression therapy is delivered through a machine called the DRX9000™, which has the capacity to produce 150 pounds of tractioning decompressive force through gentle motion.

“We get the patient comfortable on the table, and the DRX9000 creates a very gentle decompressive force on the discs that reduces disc pressure and helps pull some of that disc material back inward, which alleviates the pain,” Dr. Gordon educates.

Cervical and/or lumbar disc injuries can be treated through the DRX9000, which is typically part of a program of therapy consisting of 24 visits across ten weeks. Each visit lasts about an hour, with the first ten designed to determine the patient’s likely response.

“We do it five days a week for two weeks, and our goal is to see a fifty percent improvement in function and pain in those first ten visits,” Dr. Gordon relates. “If we see that improvement, we continue with the rest of the twenty-four-visit rehabilitation protocol.”

Angela says she had never heard of spinal decompression before it was recommended to her but was willing to try it if it meant avoiding surgery. It was during her first treatment that she became an advocate for the treatment and the practice offering it.

“You can actually feel the stretch and the pull while you’re on the table, and it feels quite good,” she enthuses. “Best of all, it works. After about six weeks of treatment, the numbness in my leg and foot was gone, and now, the pain is my back is gone, too.

“The doctors said I would probably have to go back maybe once a month for an extra treatment, but it’s been three months, and I haven’t felt a need to go back at all. I will gladly go, though, if I feel a need to because everyone there is amazing.

“The staff is so friendly and upbeat, it’s a great place and the doctors all listen to you so well. It’s really a fun group. I would tell anyone with back issues, Before you have surgery, go to DeLand Chiropractic and Spinal Decompression and have them look at you.”